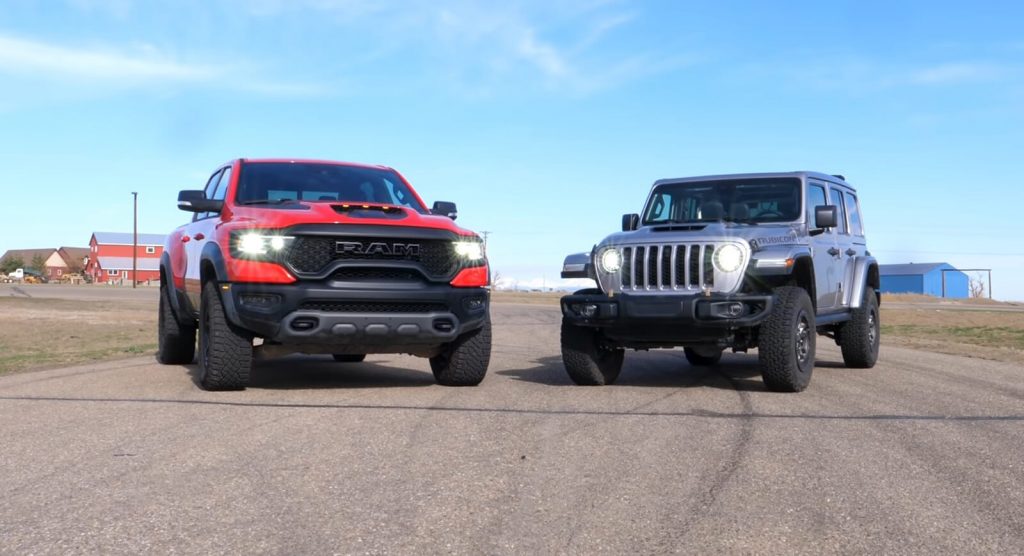 What would you do if you had two very powerful off-roaders, such as the Ram 1500 TRX and Jeep Wrangler Rubicon 392 and a long stretch of asphalt at your disposal? Why, you’d probably organize a drag race, of course.

If you remembered the specs of the two vehicles, then you probably already said that the 1500 TRX holds the upper hand in terms of power. And you would be right, because the supercharged 6.2-liter V8 engine produces 702 horsepower and 650 pound-feet (881 Nm) of torque in this model.

The Wrangler Rubicon 392, on the other hand, is less powerful. The 6.4-liter Hemi V8 engine, which can also be found in the Grand Cherokee and Dodge’s Challenger, Charger and Durango, pushes out ‘only’ 470 HP and 470 lb-ft (637 Nm). However, the straight-line performance is actually identical in both high-riders, with the nought to 60 mph (0-96 km/h) sprint taking 4.5 seconds.

The top-of-the-line version of the Wrangler will run down the quarter mile in exactly 13 seconds after take-off, whereas the high-performance pickup truck is one tenth of a second quicker, according to Ram. As a result, despite the rather big gap in power between the Wrangler Rubicon 392 and 1500 TRX, they are evenly matched, so it could be anyone’s game. Ultimately, it comes down to the drivers’ skills, but if you were to place a little bet, which one would get your vote? Now head on down to see if you have nailed it.