There are a wealth of exciting dimensions that could be visited throughout the plot of Doctor Strange in the Multiverse of Madness. This is especially true given the Multiverse clearly lies at the heart of the MCU’s Phase 4 slate. The WandaVision trailer clearly showed Scarlet Witch creating a reality bubble around the town of Westview, suggesting her powers have expanded to resemble those she possesses in the comics. The Loki TV series will star Tom Hiddleston as the Trickster God of another timeline, one where he escaped the Avengers after the Battle of New York. There’s building evidence the Multiverse will be central to Spider-Man: Homecoming 3 – and then there’s Doctor Strange in the Multiverse of Madness.

When most people think of the term “Multiverse,” they assume Marvel is referring to the idea of alternate timelines. But, as Doctor Strange director Scott Derrickson noted in a tweet, Marvel’s Multiverse is far more than that. The MCU’s Multiverse is loosely inspired by Doctor Strange #21, which envisioned Earth as at the center of an infinite sea. Alternate Earths are close to the center, but the further away you go, the more the laws of nature change. The Dark Dimension is one of the more distant worlds, inimical to conventional life, that appears far different to this universe. This the Multiverse as seen in Doctor Strange‘s famous “Magical Mystery Tour” scene, in which the Ancient One blasted Stephen Strange on a mind-boggling journey through the dimensions. While it’s true Derrickson is no longer involved with Doctor Strange 2, there’s no reason to assume Marvel has changed their basic definition.

Related: Why Marvel’s Multiverse Will Be Bigger Than The DCEU’s

So which dimensions could be visited in Doctor Strange in the Multiverse of Madness? While it’s always possible the MCU will return to the Dark Dimension or the Microverse, hopefully the script will be a lot more creative and will introduce some of the more remarkable and unusual dimensions. Here are some of the most exciting possibilities, drawn from the comics, that would be thrilling to see brought to life on the big screen.

Recently redefined in the X-Men’s X of Swords event, the Otherworld is a mystical plane of reality that sits at the heart of the Multiverse. It is dominated by the Starlight Citadel, home of Saturnyne, the Omniversal Majestrex who rules the entire Multiverse and commands the Captain Britain Corps, the defenders of all reality. The Otherworld is divided into different kingdoms or domains, the Fair and Foul Courts, and its inhabitants include legendary figures such as Merlyn and King Arthur. Interestingly, the MCU does indeed appear to be headed in a rather Otherworldly direction, with two hints at Otherworldly heroes. Kit Harington will be joining the MCU in Eternals as the Black Knight, a character strongly associated with Otherworld, and Avengers: Endgame featured a subtle reference to the Braddock family, perhaps hinting at Captain Britain himself.

The Dimension of Dreams

The Dimension of Dreams is one of the most important realms of the Marvel Comics universe, and for years there have been reports Marvel was interested in introducing it in Doctor Strange 2. Ruled by a malevolent entity named Nightmare, the Dream Dimension was introduced in Strange Tales #110, the very issue that saw Doctor Strange himself make his comic book debut. In that issue, Strange attempted to find out why a man’s dreams were plagued with darkness, and waited till he slept, using his magic to enter his dreams. He discovered that the dreaming minds of human beings connect with another astral dimension, and that the monarch of this plane of existence, who calls himself Nightmare, longs to conquer the waking world.

Marvel seems to have been wary of incorporating the various afterlife dimensions into the MCU, and as a result, it’s unlikely they will use any of their traditional Hell Dimensions. But one alternative does remain, the Hell Dimension of Limbo. Like other Hell Dimensions, Limbo is a place of corruption, and any human being who enters it winds up twisted by its baleful influence. It is ruled by a monstrous villain named Belasco, and the demonic inhabitants of Limbo burn with a hunger to consume other planes of existence. Limbo has figured in some major Marvel events in the past, even invading Earth in force in the classic Inferno arc. It’s strongly associated with the X-Men’s Magik, a mutant sorceress who was kidnapped by Belasco; the X-Men rescued her in a matter of moments, but time progresses differently in Limbo than in the real world, and consequently, she returned as a teenager who had spent years in a realm of dark magic.

There is a sense in which the Negative Zone is the twisted mirror-image of the main Marvel reality. It is a place composed entirely of antimatter, and anything that moves between the universes must reverse its polarity or risk instant annihilation. This universe is an ancient one, and it is now contracting, moving ever closer towards heat death. As with many of these dimensions, time operates differently in the Negative Zone, moving at something like three times the speed. The Negative Zone is strongly associated with the Fantastic Four, as Reed Richards was the first person to create a portal there, but it can also be accessed – albeit at great risk – by sorcerers. It is inhabited by countless monstrous beings and alien races, many of whom are keen to expand their territory to a more stable universe that is still expanding.

A sword-and-sorcery dimension, Weirdworld lives up to its name and has frequently been one of the most complex and beautiful dimensions in Marvel Comics. Weirdworld was annihilated in the aftermath of 2015’s Secret Wars event, but a fragment of the dimensional plane remained as a floating island on Earth – and naturally, this immediately became something of an aviation hazard. It would be thrilling to see Doctor Strange in the Multiverse of Madness leave a lasting mark upon the Earth, with some of the more esoteric realities left crossing over with the main universe. The Black Knight may be tied to Otherworld, but after Secret Wars the Black Knight became one of Weirdworld’s greatest champions, so there’s a clear potential direction of travel here for the MCU. This would be a wise move for Marvel. 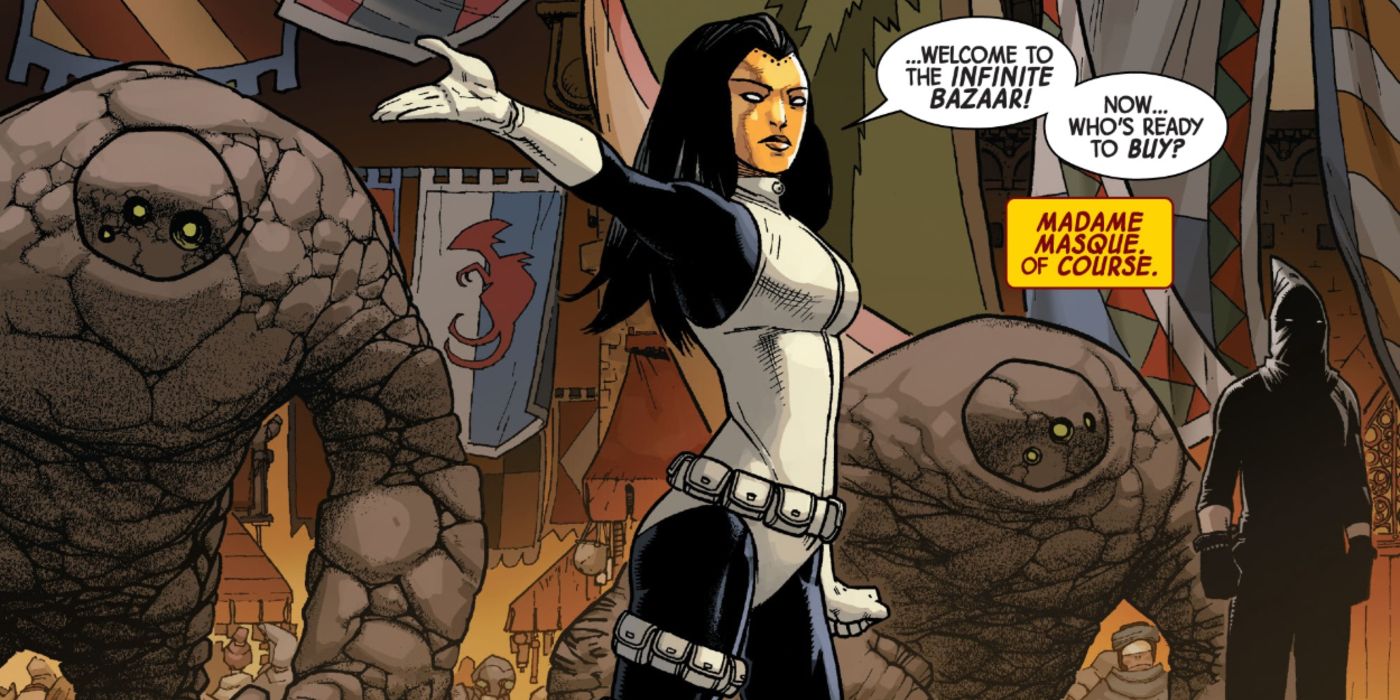 A recent addition in Marvel Comics lore, Kryll City is essentially the Diagon Alley of the Marvel Universe. This is an entire city on another plane of existence, and it magically adapts to accommodate any bio-system. Whether you require Earth-compatible gravity or neon gas to breathe, Kryll provides. Consequently, it has become a trading center for magical beings from every Earth and every plane of reality. It has only appeared briefly in the comics, but Doctor Strange was chilled at the items he saw for sale there, things so dangerous they have been outlawed by the Living Tribunal himself; soul twisters, cauldrons of Evernight, and Mephisto’s Tears. The concept is an exciting one, and it would be thrilling to see it adapted onto the big screen.

Introduced in James Robinson’s superb Scarlet Witch series, the Witches’ Road is a plane of existence that can only be accessed by female sorceresses. Witches like Wanda Maximoff can use this place to help them travel between locations, both on Earth and on other realms. Time is a vague and indistinct thing on the Witches’ Road, though, and it is there that Wanda met her mother for the first time. Natalya Maximoff was the Scarlet Witch before Wanda, and indeed Wanda essentially embodies her mother’s chaotic legacy. Kevin Feige has confirmed WandaVision will finally see Elizabeth Olsen’s character become the Scarlet Witch, potentially pointing to this idea. Given Olsen will then return in Doctor Strange 2, it wouldn’t be a surprise for her to wind up on the Witches’ Road at some point.

What Happened To The Mandalorian’s Jetpack? Chapter 14’s Weirdest Moment

Tom Bacon is one of Screen Rant’s staff writers, and he’s frankly amused that his childhood is back – and this time it’s cool. Tom’s focus tends to be on the various superhero franchises, as well as Star Wars, Doctor Who, and Star Trek; he’s also an avid comic book reader. Over the years, Tom has built a strong relationship with aspects of the various fan communities, and is a Moderator on some of Facebook’s largest MCU and X-Men groups. Previously, he’s written entertainment news and articles for Movie Pilot.

A graduate of Edge Hill University in the United Kingdom, Tom is still strongly connected with his alma mater; in fact, in his spare time he’s a voluntary chaplain there. He’s heavily involved with his local church, and anyone who checks him out on Twitter will quickly learn that he’s interested in British politics as well.