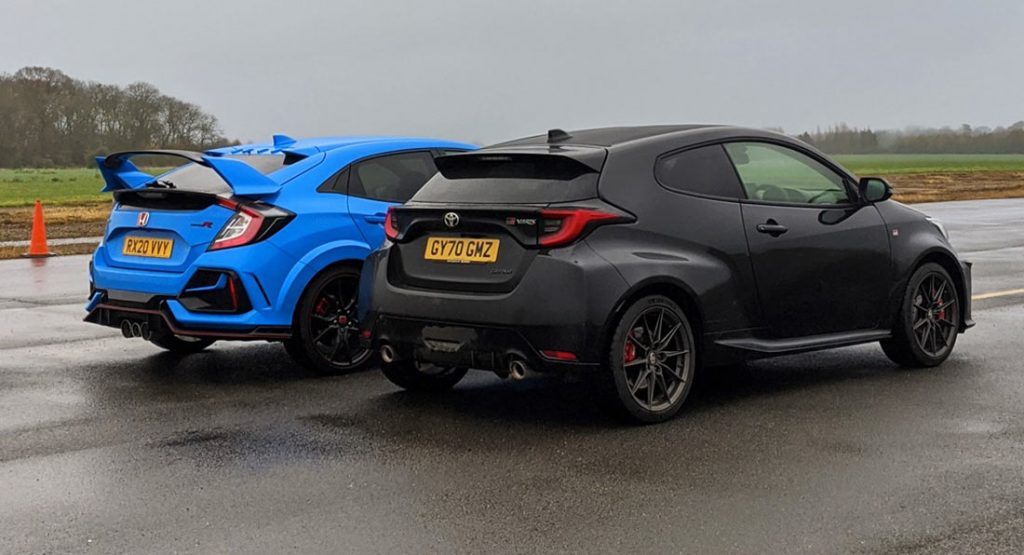 There’s no doubt that the new Toyota GR Yaris is the hot hatch of the moment, but can it compete with the current king of hot hatches, the Honda Civic Type R, in a straight line?

The numbers favor the Honda. Its 2.0-liter turbocharged four-cylinder pumps out an impressive 316 hp and 295 lb-ft (400 Nm) of torque, sent to the front wheels courtesy of a six-speed manual transmission.

Watch Also: See The Toyota GR Yaris Lap The Nurburgring Bridge To Gantry In Under 8 Minutes

By comparison, the GR Yaris makes do with 257 hp and 266 lb-ft (360 Nm), putting it at a significant disadvantage to the Honda. However, whereas the Civic Type R is front-wheel drive, the GR Yaris is all-wheel drive and has a grip advantage. It is also smaller and lighter.

CarWow’s tests were conducted along a damp runway that, in theory, favored the Toyota. However, in the first race, the driver of the GR Yaris botched the launch after seeing a power steering malfunction error on the dashboard. In the second race, the two get off the line quite evenly, but the Toyota quickly streaks ahead of the Type R as the Honda struggles to put all of its power to the tarmac.

A rolling race from third gear is then held between the two and this time, the Honda proves to be too quick for the Toyota. Last, but not least, is a brake test where the GR Yaris is able to stop much faster than the Type R.