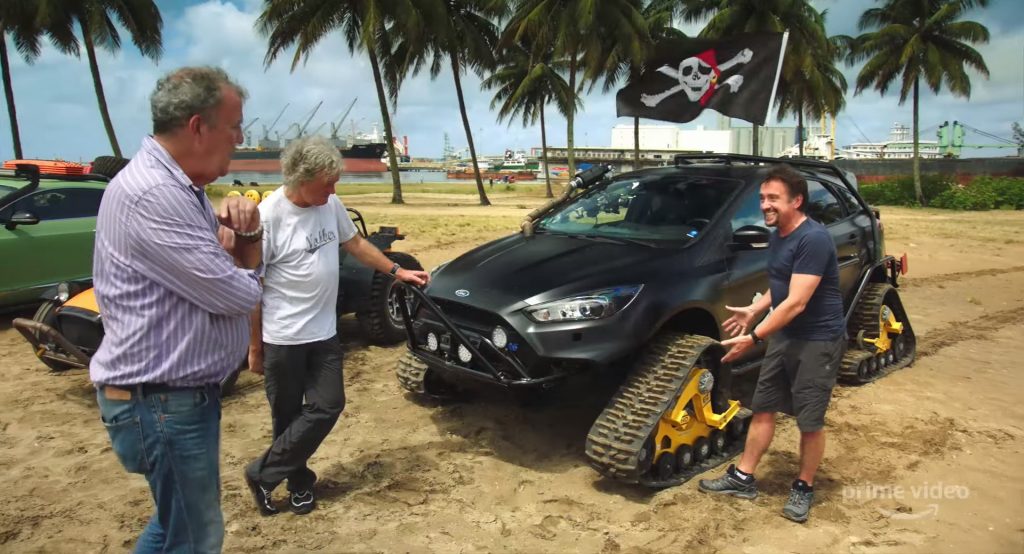 It’s been a long time since we saw the three presenters taking part in another four-wheeled adventure but this is about to change as The Grand Tour has dropped the first trailer of the Madagascar special, called ‘A Massive Hunt’.

In true TGT fashion, the cars are far from ideal for the chosen terrain: Clarkson has an old Bentley Continental GT, May is behind the wheel of a Caterham and Hammond drives a Ford Focus RS.

The trailer reveals that all three cars started this Madagascar adventure in their factory form, only to be subjected to some serious modding in a bid to make them a bit more off-road-friendly.

Perhaps the most impressive car here is that Focus RS, which gained a set of wheel-driven tracks and a snorkel kit. Clarkson’s modified Bentley Conti GT also reminded us of that weird off-road build we showed you back in 2017, but the car here looks extra spicy with its double snorkels poking from the fenders. The funniest car is without a doubt that Caterham, which looks like it gained a pair of tractor wheels in the back.

The official description of the new TGT special reads: “Armed with three sports cars, Richard, James and Jeremy believe they are in for a cushy road trip and fun escapades as they arrive in Reunion and race on the world’s most expensive piece of tarmac, a jaw dropping ring road built out in the sea. But a bizarre challenge from Mr Wilman propels them across the ocean to Madagascar, where they must tackle the toughest road in the world, in some of the most extremely modded cars they have ever built, in order to complete one of their toughest quests to date.”