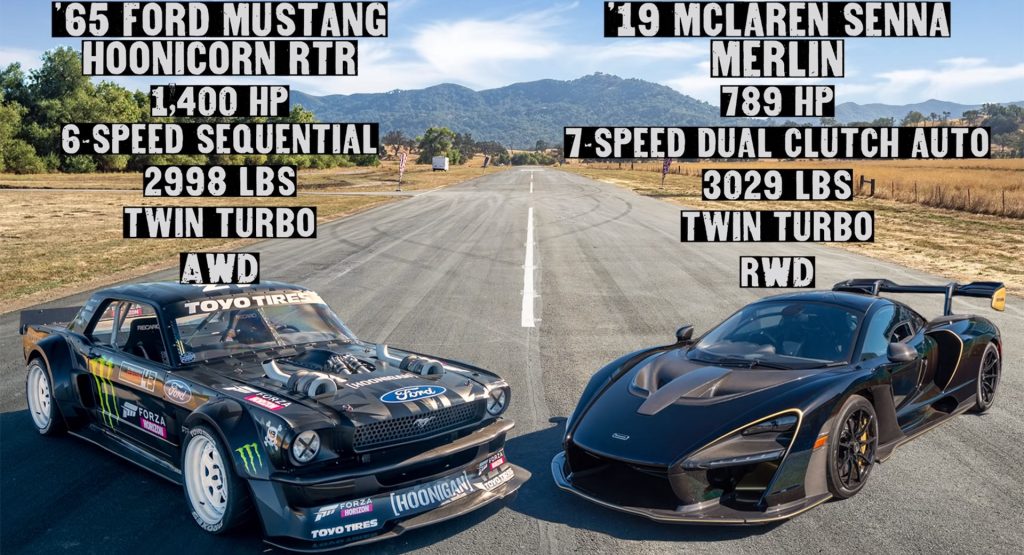 The McLaren Senna may be one of the most insane production cars launched in recent memory, but it can’t hold a candle to Ken Block’s Hoonicorn V2.

Based on a 1965 Ford Mustang, Block’s Hoonicorn V2 was unveiled back in 2016 and was quickly put to work in the epic ‘Climbkhana’ up Pikes Peak. It is an absolute weapon and recently faced off with a McLaren Senna for a series of drag races.

The Senna featured in this video is a one-off known as the Merlin Edition and is painted in a remarkable shade of black filled with multi-colored metallic flakes. It is powered by a twin-turbocharged 4.0-liter V8 churning out 789 hp that enables it to hit 62 mph (100 km/h) in 2.8 seconds.

By comparison, the Hoonicorn V2 has a custom-built 6.7-liter V8 with a pair of massive turbochargers. It runs on methanol and kicks out 1,400 hp, giving it a very healthy power advantage over the Senna.

In a straight-line, it’s not even close. Despite Block spinning up all four wheels off the line, he leaves the Senna for dead and ultimately wins by multiple car lengths. In the third and final race, the McLaren was given a three-car head start but despite that, the Hoonicorn emerged victorious once more.