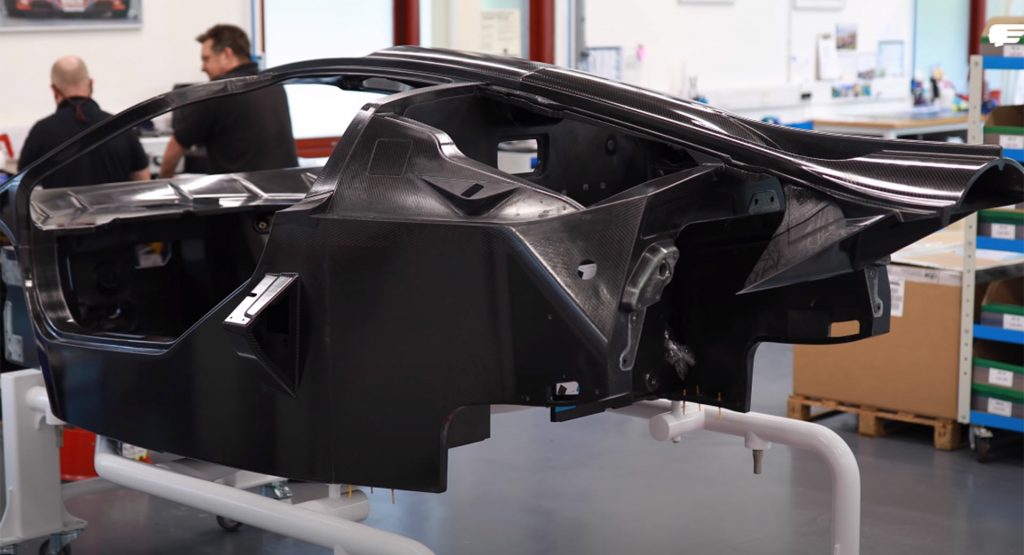 Gordon Murray Automotive’s T.50 is progressing towards production and the small firm has showcased the first carbon fiber monocoque for its supercar.

Many of the headlines about the T.50 have related to the Cosworth-developed 3.9-liter V12 engine – and for good reason, as it delivers 654 hp and revs to an extraordinary 12,100 rpm. However, the carbon fiber monocoque of the car is extremely impressive in its own right.

Tipping the scales at 220 lbs (100 kg), the monocoque is the key part that has enabled Gordon Murray Automotive to keep the overall weight of the T.50 down to just 2,174 lbs (986 kg). The shape of the monocoque also gives the T.50 its unique three-seater design that harks back to the iconic McLaren F1.

Speaking of the interior, the driver seats in the center and is flanked by two passenger seats. One particularly cool aspect of the cabin is the ‘floating’ arm on the right of the driver’s seat that houses an exposed titanium shifter and the infotainment controls. It’s an innovative design that demonstrates just how driver-focused the T.50 is.

Just 100 examples of Gordon Murray’s creation will be built and they carry a rather lofty price tag. Buyers looking to pick up the keys to one will need to part ways with at least €2.62 million ($3.1 million) before taxes. That’s an extraordinary amount of money and puts the T.50 roughly in line with the upcoming Aston Martin Valkyrie.