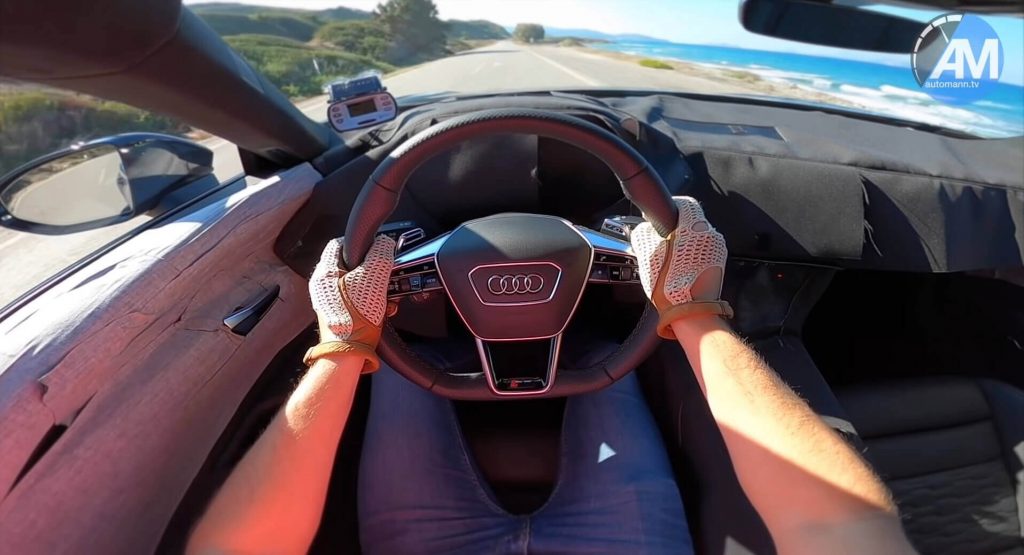 With Audi giving journalists access to pre-production prototypes of the Audi RS E-Tron GT, it was only a matter of time before the first POV video popped up.

Filmed in Rhodes, Greece, during the official media preview of the electric super sedan, it showcases the straight-line acceleration of the car and even shows the quarter-mile time, which is quite impressive for a model of this size and weight.

We won’t spoil the numbers recorded on a third-party device, but it’s worth noting that Audi’s official estimate for the 0 to 62 mph (0-100 km/h) sprint is under 3.5 seconds with everything in the sportiest setting, while top speed stands at 155 mph (250 km/h).

Tipping the scales at over 5,000 pounds (2.3 tons), the RS E-Tron GT is powered by two electric motors, one on each axle, that drive the wheels through a two-speed gearbox, with the first gear keeping it under 50 mph (80 km/h).

You won’t find any official output and torque numbers yet simply because the car is still in the homologation phase. Nonetheless, we managed to get our hands on the preliminary specs, confirmed by an Audi spokesperson, which are 590 HP (598 PS / 440 kW) and 612 lb-ft (830 Nm) combined, with up to 637 HP (646 PS / 475 kW) on OverBoost for faster takeoffs.

Unsurprisingly, this makes it less powerful than its sibling, the Porsche Taycan Turbo, with which it shares the same 83.7 kWh battery that supports fast charging.

The RS E-Tron GT will be unveiled before the end of the year and will launch next spring.